We read about persecuted Christians and see horrible images in the media.  Have you ever asked, “What can I do about it?”  Jessi Emmert shares a story in Good News Magazine about one woman, Juliana Taimoorazy who did do something, and you can too. To learn more about Taimoorazy’s work with the Iraqi Christian Relief Council and to get involved with helping Middle Eastern Christians, visit www.iraqichristianrelief.org.

The Plight of Displaced Christians
April 28, 2015 By Jessi Emmert

“I lived in Germany during the Nazi holocaust. I considered myself a Christian. I have attended church since I was a small boy. We had heard the stories of what was happening to the Jews, but like most people today in this country, we tried to distance ourselves from the reality of what was really taking place. What could anyone do to stop it?

“A railroad track ran behind our small church, and each Sunday morning we would hear the whistle from a distance and then the clacking of the wheels moving over the track. We became disturbed when one Sunday we noticed cries coming from the train as it passed by. We grimly realized that the train was carrying Jews. They were like cattle in those cars!

“Week after week that train whistle would blow. We would dread to hear the sound of those old wheels because we knew that the Jews would begin to cry out to us as they passed our church. It was so terribly disturbing! We could do nothing to help these poor miserable people, yet their screams tormented us. We knew exactly at what time that whistle would blow, and we decided the only way to keep from being so disturbed by the cries was to start singing our hymns. By the time that train came rumbling past the churchyard, we were singing at the top of our voices. If some of the screams reached our ears, we’d just sing a little louder until we could hear them no more. Years have passed and no one talks about it much anymore, but I still hear that train whistle in my sleep. I can still hear them crying out for help. God forgive all of us who called ourselves Christians, yet did nothing to intervene.”

(An elderly man told the preceding story to author Penny Lea, www.pennylea.org. It is reprinted here with her permission.) 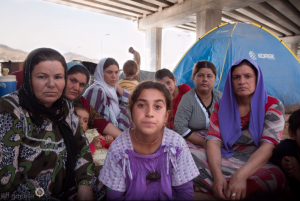 Juliana Taimoorazy’s family has paid a heavy price for their Christian faith. Her great-grandmother and great-grandfather died in a refugee camp. Her grandmother had two sisters who were kidnapped and killed. Her great uncle was cut into pieces.

Taimoorazy is an Assyrian Catholic Christian who grew up in Iran. “When I would go to school, my middle school was a Muslim school, a public school,” she said. “I was mocked for my faith. They always told me I would burn in hell for my Christian name and that I was not good enough to play with the Muslim kids.”

In 1989, when she was 16 years old, Taimoorazy’s father worked to create a fake visa and passport for her so she could be smuggled out of Iran. She made it to Switzerland and then went on to Germany. She stayed as a refugee in Germany for one year before traveling to the U.S. in 1990.

In the U.S., she invested in her education, earning both a bachelor’s degree and master’s degree from Northeastern Illinois University. She was living in Chicago when the U.S. went to war in Iraq in 2003. “When America went to war we [Assyrian Christians] supported the war and wanted Saddam gone,” she said. “Al Qaeda had found a home in Iraq and started systematically killing Christians. They started by sending threat letters to families, telling them they would be targeted if they didn’t convert to Islam. If they ignored this command they were killed. Hundreds of Assyrians were killed because of this. Then they started attacking the churches. Our churches have been bombed over a hundred times. They’ve either been destroyed or turned into mosques and worship centers for themselves. They started killing clergy. All of this was happening and the world really didn’t pay any attention.”

Taimoorazy was frustrated by the lack of action to help Christians in the Middle East. She was attending a parish in the Archdiocese of Chicago and spoke to Cardinal Francis George about her concerns. He invited her to come in and have a meeting with him, during which she asked him what the Vatican was doing to protect Middle Eastern Christians. It was through this conversation that Taimoorazy decided to start the Iraqi Christian Relief Council to help people suffering in the Middle East. 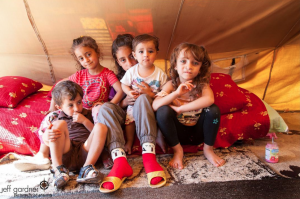 Though the organization has existed and been providing assistance since 2003, Taimoorazy explained that much of their support has come in the last few months as a result of the ISIS atrocities. “The media is just now starting to shed light on it, I think because of the level of the atrocities,” she said. “That’s when the world started paying attention. Otherwise, I really believe because it’s a Christian issue, the world has ignored it because of anti-Christian sentiment. We’re afraid of offending the other side who are Muslims. We try to appease them by not talking about it and covering the whole genocide up. It is genocide. The Iraqi government has called it a genocide against minorities of the country.”

The council supports two organizations on the ground, the Assyrian Aid Society of Iraq and the Dominican Sisters of Saint Catherine of Siena — Iraq. These organizations are helping to take care of more than 200,000 displaced Christians, and the council has been able to help more than 130,000 of them through donations.

“There are people living in Jordan, Turkey and Syria and Iraq who are completely displaced,” Taimoorazy said. “The living conditions are horrid. I’ve seen pictures and heard horror stories. Chicken pox is running rampant in the refugee camps. The basic necessities are food, medicine, clean water, blankets, and warm clothing, because it’s still winter in Iraq.”

The tragedy is personal for Taimoorazy and her family, but she has also seen it impact the lives of those she works with. “One of my board members, her family was attacked in Syria. Seven family members were kidnapped by ISIS and two were executed just about a month ago.”

The Assyrians were one of the first to convert as a nation to Christianity through St. Thomas, Taimoorazy explained. “We took Christianity to the East, to India, to China. But we paid a heavy price when Muslims came through and destroyed our villages and killed our monks and nuns and burned all the manuscripts.” This devastation continues today, she said. ISIS has ruined historical monuments that have stood for thousands of years. “They want to completely eradicate the name of Assyrians from the face of the earth. So even history books will not talk about it because there’s nothing left to point school kids to,” Taimoorazy said.

The sex trade is another disaster being fostered by the displacement. Women are sold to men who make orders for what age girl they want or what hair color she should have, Taimoorazy explained. This grotesque trade is lucrative, with the price for a child ranging from $175 to $66,000.

Taimoorazy emphasized that Christians can no longer sit by and allow this to happen. She is working to spread the word about the persecution in several different ways. One is through a memoir about her life and the persecution that she hopes to complete this year. Another is through a documentary project.

“The documentary is called ‘Sing a Little Louder,’” she said. “It highlights how the churches in Germany would literally sing louder and louder to drown out the cries of the Jews and others being taken to death camps on the trains. This is a true-life story written by Penny Lea after a man approached her with his story. It was meant to be a pro-life movie, meaning anti-abortion, but it’s turned into a pro-life movie in an all-encompassing way.

“It’s about taking innocent lives,” Taimoorazy concluded. “We’re linking it to churches here that sing louder through their choirs, drowning out the cries of the Christians in the Middle East.”

Jessi Emmert Hooley is the editorial assistant at Good News.

The documentary will be released through viewings in several cities during 2015. The trailer and more information can be found at www.singloudermovie.com. To learn more about Taimoorazy’s work with the Iraqi Christian Relief Council and to get involved with helping Middle Eastern Christians, visit www.iraqichristianrelief.org.