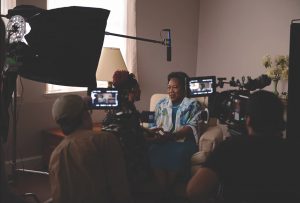 Produced by Stephen Curry and Viola Davis, the documentary Emanuel revisits the 2015 mass shooting at Emanuel AME Church in Charleston, South Carolina, where nine parishioners attending a weekly Bible study were murdered by the white supremacist, Dylann Roof. The twenty-one year old had joined the Bible study and was welcomed by those who would become his victims. Even five years later, the senseless killing is shocking.

As then President Obama said, “Any shooting involving multiple victims is a tragedy. There is something particularly heartbreaking about that happening in a place where we seek solace, seek peace, a place of worship.”

What happened in Charleston was a blatant unprovoked act of overt racism. Five summers have come and gone. During this past summer, peaceful protests and sporadic riots spread to hundreds of cities and towns in all 50 states and over 60 other countries.

The film explores why Charleston did not break out in protests and riots. To understand this, it helps to revisit the aftermath of that tragic day, June 17, 2015.

In 2015 it appeared that we were going backward, not forward, in the struggle to eliminate racism. The strides we had made in combatting racism seemed to be slipping away. This was evident to many as the country witnessed demonstrations turned destructive in Ferguson, Missouri; New York City; and Baltimore, Maryland.

But that perception was turned on its head by the truly Christian reaction and witness of many of the victims’ family members and the church family of Emanuel AME Church. What happened in Charleston was an example – a visceral and difficult example – to the world that when we live out the love of Christ and His teaching on forgiveness, it can bring triumph out of tragedy.

Shortly after his arrest, the shooter was arraigned in court. He turned out to be a white male in his early twenties. Usually in such cases, the victims’ families are not allowed to speak until the sentencing phase. But for some reason, the presiding judge allowed the nine victims’ families to speak directly to the alleged shooter at the bond hearing. Some people present did not speak, but five relatives chose to do so.

What they said to the shooter was truly Christ-like, for each who spoke forgave the shooter and asked for mercy on his soul. The grandson of one victim urged him to repent and turn his life over to Jesus Christ. A granddaughter of another victim said that the pleas for the shooter’s soul were proof that “Hate won’t win.” She went on to say that God’s mercy is even there for him, and she prayed that at some point he would find God’s mercy. Then she said, “I am ready to forgive him. I have to, because that (un-forgiveness) would block so many blessings. Nothing grows positive out of hate.”

And hate did not win. There was no denial of the pain and loss by those who spoke, but there was testimony to a higher reality. Legal and justice reform and peaceful protest are one part of the solution we need to move forward. Love and forgiveness is another essential factor. There are so many lessons to be taken from the witness of the Emanuel AME Church. The Spirit of the Lord moved in such a mighty way through all involved.

The judge at the bond hearing of Dylann Roof called attention to the family of the shooter. He reminded all, that they too are grieving the actions of the young man. They too would suffer loss. They too needed our prayers, our forgiveness, and the love of Christ showered on them. His words were grace filled. They were words for which the judge would be severely criticized.

It would be days before the appalling circumstances of that young man’s life became known. As news reports in the New York Times and the Chicago Tribune surfaced, a story of family dysfunction emerged. Dylann was the product of a broken home where domestic violence was not uncommon. His parents had divorced; he was born after a brief reconciliation that did not last. He was raised by a step-mother who also divorced Dylann’s father about the time he entered high school. He fell victim to drugs, alcohol, and virulent, hate-filled websites after dropping out of school in the tenth grade.

The writer of the New Testament book of Hebrews exhorts believers to draw near with a true heart of faith and hold fast the confession of our hope without wavering (chapter 10). The writer goes on asking us to “consider how we may spur one another on toward love and good works….” Indeed the members of Emanuel AME Church held fast their confession as they spoke to the young man who took from them their beloved family members.

But their demonstration of love and forgiveness was not confined to the shooter.

These families stirred up much love and good works in their community and even beyond. Large banners appeared on some buildings urging racial harmony, and many churches hosted prayer vigils. When Sunday came, Emanuel AME Church held church as usual. Their faith was not shaken. Worship that morning was particularly vigorous as those gathered danced, sang hymns, and shook tambourines.

The Rev. Norvell Goff brought the sermon. He too reached out with words of hope, love, and thankfulness. Early in the sermon he said, “We still believe that prayer changes things. Can I get a witness?” The congregation responded with a rousing, “Yes.” “But prayer not only changes things, it changes us,” he continued.

He thanked law enforcement specifically, and the city for responding with love and compassion. In his sermon, Pastor Goff said, “A lot of people expected us to do something strange and break out into a riot… Well they just don’t know us. They don’t know us because we are a people of faith…What was meant to divide us has united us.” And how true those words proved to be.

As the Emanuel Church goers left the service, outside on the sidewalks, they were greeted by a large crowd of mostly white people singing Amazing Grace. Many were moved to tears as the love of Christ which the families had extended to the shooter was extended to them.

That same Sunday, some 20,000 people of various races walked across Charleston’s Ravenel bridge, some arm in arm, to show the world that blacks and whites stood in solidarity.

Of course there were the detractors who seized upon this situation with the hopes of pushing through their agendas. But far more powerful was the witness throughout the weekend following the shooting that demonstrated the power of Christ when he is embedded in the hearts of men and women.

The documentary capably reminds us of the truly Christ-like response of the members of the Emanuel AME Church who instinctively showed that real, godly, biblical justice is not possible without the love of Christ and the power of forgiveness.

When we pray the Lord’s Prayer we ask him to forgive us as we have forgiven others. Do we really mean that? Have we appropriated forgiveness in our own lives and taken an honest look at our unredeemed, un-Christ-like behavior and attitudes? Have we truly forgiven the same actions and attitudes in other people?

It is time for the church to remember the witness of the Emanuel AME Church. If we learn anything from this evil, racist, senseless shooting of nine innocent blacks gathered to study God’s Word, it should be that the power of forgiveness brings about real change.