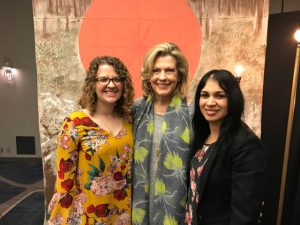 “Now is the time of God’s favor, Now is the day of salvation.”

Each year, women come to the national conference of the Celebration Women’s Ministry in Houston seeking to grow in Christ and encounter God’s Spirit. Some seek the assurance of salvation; others need forgiveness or desire to be liberated from sin, past and present; still others seek spiritual, emotional, or physical healing. This past March, women experienced all this and more at the Celebration gathering.

The Celebration leadership team chose their 2018 conference theme from the above cited verses from Paul’s second letter to the Corinthians. They were reminded that the people of the Corinthian Church had much in common with the church in America of our day. They too were suffering disunity; sexual immorality was a problem, and difficult challenges were overwhelming the church. In the two letters to the Corinthians, we find some of Paul’s most important theological writing.

Inspired by Paul’s words, “Now is the time of God’s favor – the day of His salvation,” the leadership team delved into the meaning of salvation. They found it to be a comprehensive term that had a depth of meaning beyond the initial decision to believe and be saved from the consequences of sin. Salvation was a word that implied forgiveness, healing, prosperity, deliverance, safety, rescue, liberation, and restoration. It signified everything the leadership team hoped women would experience at their yearly conference.

Readers of Good News will recall the March/April 2017 cover story written by editor Steve Beard about the Spirit-filled revival in the Methodist Church of Cuba. He had visited Cuba with Dr. David Watson, the academic dean at United Theological Seminary, and a team of seminarians. During a conversation after the article came out, Beard encouraged Judy Graham, president of Celebration, to visit the Cuban church or bring the move of the Spirit in Cuba to the women of Celebration. In response, he and Watson put her in touch with Pastor Adria Nuñez Ortiz from Havana.

Pastor Nuñez is the product of a powerful move of God and His Spirit in her country. The people in her Havana community know first-hand the hardship of living with scarce resources such as food and clothing. Although for many decades, freedom to worship publically was not possible, belief in Christ survived. It brought hope and helped the Cuban people rise above their circumstances.

Salvation was the power that healed, allowed those trapped in prostitution, drugs, and other addictions to find freedom, and gave them the ability to forgive and be forgiven. Pastor Nuñez wanted the women of Celebration to know and experience the power of salvation to bring dynamic transformation that enables all women in every culture to find the way that leads to life.

Nuñez told the women to “rise up wisely like Jael, to be virtuous like Mary, to carry hope to those around them like Esther and Ruth, to be full of faith like Hannah, and to be sensible and brave like Deborah.” Each of these Bible women were given exactly what was needed to meet their challenges; each challenge was unique. Nuñez wanted each woman to be as faithful and courageous as Esther, who the Lord had raised up for the challenge of “such a time as this.” 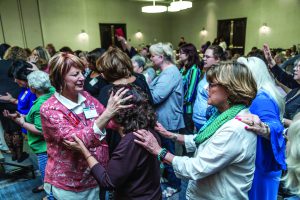 At the close of her message, she issued a call for women who needed physical healing in their bodies and those who needed to receive the Holy Spirit in their soul to come forward. Whether in fire and power or in a sweet gentle presence, the Holy Spirit ministered deeply to the women present at each alter call.

Pastor Jennifer Cowart of Harvest Church in Georgia, the other featured speaker, taught the women how to live out their salvation as chosen women, honored by God; as women who are being made into the image of Christ and exemplifying his characteristics. That calls for honesty, and honest she was. A spirit of conviction fell upon the conference as Cowart got specific about walking in the new nature and refusing to be dominated by the old. She encouraged the women to be more sensitive to the needs of others and grow deeper in their understanding of the love of Christ, allowing his love to flow out to those around them in practical, tangible ways.

For Graham, the entire weekend was in sync with the beautiful work of the Holy Spirit. A highlight for her, however, was getting to pray with a woman for her salvation. This young woman had never received Christ as her Savior; her work had brought her to the last five Celebration conferences, but this year during the prayer time, she ventured on stage and asked Judy to pray with her. 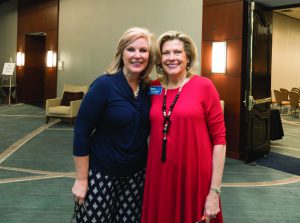 Especially important to the conference planning team was issuing an invitation to the women and pastors of the Spanish speaking churches in the Houston area and the broader Texas Conference. The planning team knew it would be exciting for them to hear Pastor Nuñez in their own language. The first evening nine women attended. The next evening more than 35 women attended – in addition to the Rev. Arturo Cadar, the Texas Conference Coordinator of Mission Field Development. After the event, he approached Graham in order to start a Spanish-language Celebration chapter. He had the women leaders in mind to continue the blessing and the move of God’s Spirit.

Before the end of the conference, testimonies began to emerge. Women were reconnected with God, many were awakened to a closer walk with Jesus, a healing presence moved in their midst, some were called into ministry, and others were inspired for mission and service.

“I felt the presence of the Holy Spirit beginning with the time I got my name tag at the registration table,” one young woman testified after attending her first Celebration event. “National Conference has changed me forever! I am a completely new person and excited about seeing God in a new light.”

“On fire” is how Judy Graham described the conference.

As the leadership of the conference began to count the ways God had moved, they gave thanks for all the lives that had been changed. For new and seasoned believers alike, National Conference was a time for each woman to move deeper into her salvation.

The theme, “Now Is The Time,” reminds us that God is at work. He is at work in our individual lives and he is at work in our church. For those who are looking for God, he is there. He is moving all of us into a more profound understanding of our salvation, that we might apprehend all that he has for us.